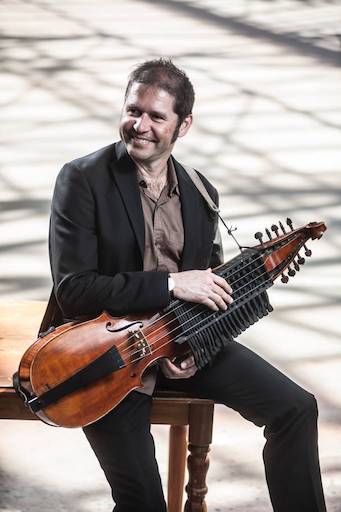 Didier François is a well known and respected Nyckelharpa player. Since the 90's he has been of the prominent players that has evolved the Nyckelharpa and Nyckelharpa music outside Sweden.

He is teaching the Nyckelharpa at the conservatory of Mechelen, the Scuola di Musica Popolare di Forlimpopoli in Italy and at the Akademie Burg Fürsteneck in Germany. He is also a member of the Cadence and Encore projects supported by the European Commission.

Didier conducts seminars and workshops on relaxation technique based on the Belgian violin school of Arthur Grumiaux: relaxed and fluid movements for beauty of sound, freedom of expression and avoidance of tendinitis.

Didier is known for creating an unusual technique and posture when playing the nyckelharpa. Holding the instrument in front of the chest, one is able to move both arms in a more natural and relaxed fashion. Using a violin shoulder rest to keep the nyckelharpa away from the body so it can swing freely also causes it to sound more open.

For many years Didier worked with the Nyckelharpa builder Joos Janssens (Dunières) for the further evolution of the instrument. Later with the nyckelharpa and bow builder Jean Claude Condi (Mirecourt), he helped with the creation of a study instrument for children. He himself plays nyckelharpas of both builders.

Today Didier Francois plays on a nyckelharpa built by Alex Pilz. It has gut strings and is specially built for renaissance-baroque music. It has a different sound than traditional swedish Nyckelharpas, closer to the viola da gamba, and therefore has the name Viola d'amore a chiavi.

If you have any questions you can email us on info@nyckelharpa.be and we will do our best to answer them as soon as possible.

You can also subscribe to our newsletter to get the latest news about the online lessons, discounts etc.